I swore to myself that I would never go back. The last time I was in China was July of 2009. It was for the World Championships in Xining, and situations were dire.

As I was preparing the documents for my visa, hunger, pollution, chicken feet and bumper to bumper traffic began swirling around in my memory. Nevertheless I willed myself to get on the plane, on my second attempt at taking the bus to the airport at 5am. (My first attempt was 24 hours too early.)

I arrived in Shanghai surprisingly exhausted. My eye mask and ear plugs worked wonderful magic on the overnight flight, but my ambien had worn off a little too early. I was a zombie. 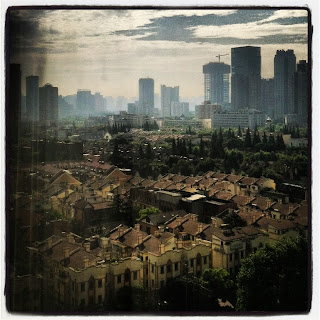 That first night I was taken to an amazing Mexican restaurant with a handful of higher-ups from The North Face, where, like an asshole, I fell asleep at the dinner table. Eventually, though, I came to realize that people here are quite fond of their catnaps, and fall asleep in public all the time. As the trip went on I began to notice this frequently, and felt slightly less bad.

My first full day I went climbing at a local gym and gave an impromptu interview, Q and A, and mini clinic. Luckily I can think quick on my feet! 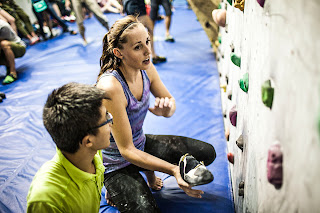 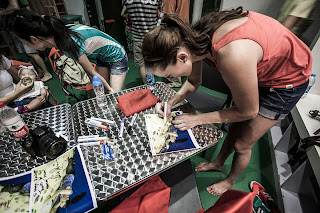 The next day was my big presentation at the China headquarters office. I was excited; I had worked hard preparing (what I think was) a funny and entertaining slide show about my awesome life, and then showed Two Girls, One Pup. Fritz was a big star. After the film finished and the floor was opened for questions, “Does Fritz have a boyfriend?” was the first one I got. “Actually, yes, she’s in a long distance relationship with a Husky named Oliver.” Giggles erupted throughout the room. I was pleased enough. 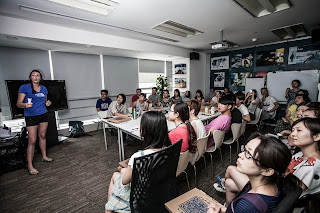 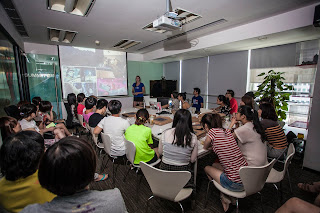 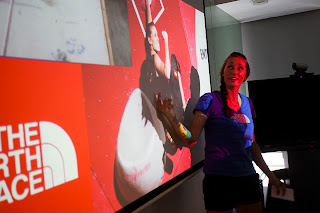 Travel to the Asia Outdoor Trade Show in Nanjing the following day was two hours by train. I presented again at a press conference, and then qualified at the comp; struggle-bus style. I made finals in third and had to vocally pep-talk myself to try harder later that night in finals. I was seriously lacking my “grr.” 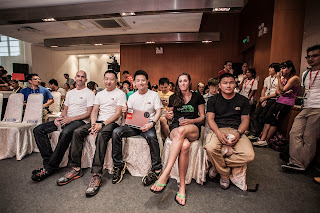 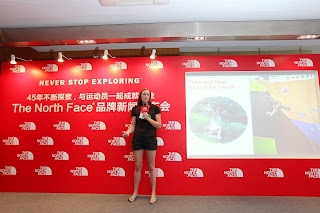 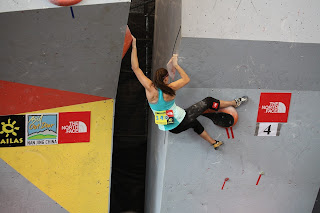 Isolation felt like a flattering game of follow the leader. I would do something significant in my spontaneous warm-up routine and then subtly watch as a few other girls began to do the same thing. When I warm up I pretty much have no clue what I'm doing, and often use ideas from other people, too, but sometimes I felt like Sid from the movie Ice Age when he gets abducted by mini sloths. Gratefully, I wasn’t going to be sacrificed to the fire gods afterward.
If you haven’t seen the movie (you should), here’s the clip in which I’m referring to:

I stepped up my game for finals and came out swinging, flashing, with much difficulty, all four problems and winning the comp. It felt good to try hard and come out on top. That pretty much covers the business aspect of the trip I guess. The everyday stuff should be much more entertaining, as I find the cultural differences quite fascinating. My recounts are obviously very broad generalizations, but much like you'd find in any huge city. 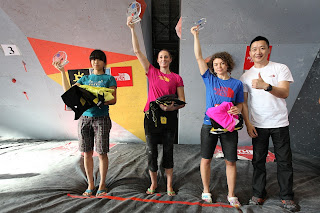 All photos by Alex Zhao

Something you don’t really get used to here is constantly being stared at. The traffic and the honking and the smoking, yes; the staring, not so much. I’ll be honest, I liked it at first. It’s attention, and who doesn’t like attention? I felt like an Amazonian goddess, but eventually I began to feel extra-terrestrial. It’s not just passing glances, but full-on, head turning, look-you-up-and-down, follow-you-when-you-walk, staring. Not just one passer-by; most of them. It was exhausting to constantly feel like you are on display.

So I started playing stare-backsies. It wasn’t very efficient, I just found myself locked into severe awkward-eye-contact battles for an indeterminable amount of time, usually with older men, them refusing to look away because I'm so “exotic,” and me refusing to look away out of Johnson stubbornness. It was arduous, and truthfully I wasn’t playing hardcore enough. After five seconds I would just start to giggle. 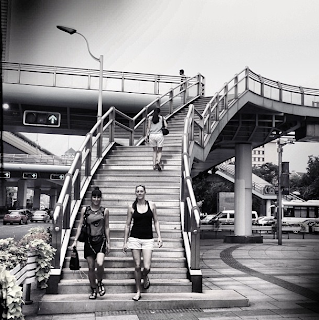 Instead, I hardened. I was good at it; living in Boulder for the last year made me an expert. Warmth and friendliness isn’t a right there, it’s earned. Drop the warm smile and replace it with a stone cold stare. Don’t look directly at anybody, just stare straight ahead. It’s not so much rudeness as it is indifference, (in Boulder it’s pretension) which is entirely socially acceptable, along with the constant honking. I started demanding when I walked through the city, though what I was demanding, I don't even know.

The thing about walking confidently is you can’t stumble. Then you just have to laugh at yourself for trying to hard. And eventually if you stand tall enough and walk briskly long enough you just get a side ache. It all became too much to care about, like the transportation.

Space on the highways is tight. Where there are three lanes, they make four. Taxi rides are a constant game of Chicken. Crossing the street is a constant game of Frogger. Which species to be? Which game to play? Try not to get smushed! It sounds outrageously dangerous, but you come to learn there’s an almost graceful ebb and flow to all of it. Almost. It goes right along with personal space: there isn’t much. And I’m a very space-bubbly person. It made it hard to breathe, but that could just have been the air.

“The smog lay thick and heavy, like a blanket, over the never-ending city… And something else poetic.” But seriously, it does. And that is the best way to describe it. I feel like I should reference all the authors who have used this metaphor before me, so as not to be a plagiarist, but the list would be too long. Also, I don’t have time. What does “smog” even mean anyway? Smelly fog? Stinky Manmade Oppressing Gas? I’ll have to google that.

Comparatively, this China experience greatly surpasses the preceding ones. The people I interacted with at The North Face (AZ, Patrick, Jacob, Hu Hao...) were fantastic. And thank God for Matt and Alia, or I'd have been singing the Les Mis classic, "On My Own," to my own personal musical. And I would have starved.

Onward to Salt Lake City and the Psicobloc comp.
Posted by Alex Johnson at 21:46