I'm still sore, and I only climbed twice. Once during the practice round to get the nerves out, and once during the competition. I didn't get any higher the second time. But it was much more fun! After I got eliminated in the first round I was really bummed I didn't get to go again, try to go higher, and take a bigger fall. This type of event may be a new athlete favorite.

Leading up to the comp I was cockily unafraid, my ego convincing the rest of me that I was a badass. I missed the first practice round, and heard everyone talking about how scary it was, but only became slightly more apprehensive. Then the nightmares happened. 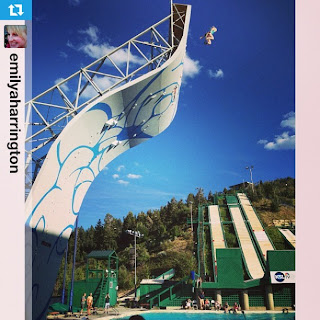 The night before my first time on the wall, I had nightmares all night long. I was falling from the top and either hitting the bottom of the pool, or missing it entirely and hitting the concrete. I woke up petrified. Showing up at the wall for my first attempt my heart was pounding hard, and as soon as I pulled on my legs started doing that Elvis shake thing. We've all experienced it... I was overgripping and looking down at my landing. I didn't get very high before I was outrageously pumped. I kicked off and shot down to the water and was submerged in less than a second, barely enough time to suck in a breath. 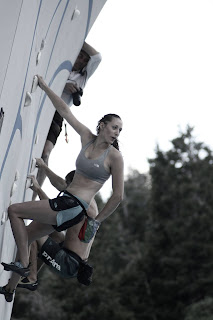 The water was not warm, and it took my breath away. In my minimal experience at this event, I was actually only afraid when I was under the water. It was just so cold it would shock my system and I'd come up gasping, almost hyperventilating, making it difficult to swim to the side. The climbing shoes didn't help either, they don't have the same effect as flippers. 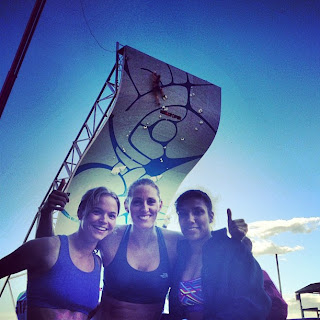 My only regret from the weekend was not being able to attend the first practice round where everyone was climbing to the top and then jumping. After that day the routes got much harder... As much fun as I had climbing and falling into the water, I must admit my favorite part of the entire event was getting the robes. The finalists were given robes embroidered with the Psicobloc logo to wear after we got out of the pool, and they were glorious. I felt like a boxer, or an Olympic swimmer. 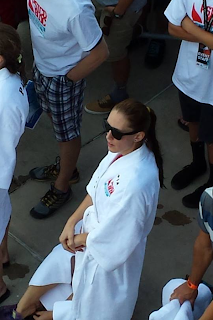 The bracket style format made the last couple of rounds super exciting, because of comprable difficulty levels of the finalists, and it turned into more of a race to the top than waiting to see who would fall first.

From an athlete's perspective, the only thing I would change for next time would be to have only 8 men and 8 women in finals, just to speed things up a little bit, and to allow for the really cool intro bios that had to be nixed due to time. I think it would keep the audience more engaged, too, having more consistent "races", and less distance between where people would fall. And possibly a slightly easier route so climbers could go faster to add more of a "non-climbing spectator-friendly" speed element? I don't know. 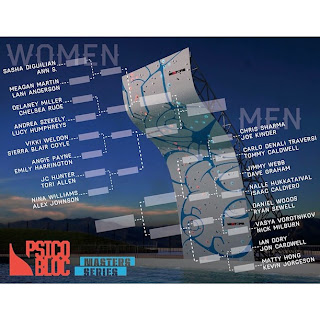 All in all, probably the most fun event I've ever had the pleasure of participating in. I can't wait for the next one, so I can get my ass in shape and get it a little higher up that wall. For 2014 I  also want to see a Mike Doyle appearance. And I absolutely adore my robe! 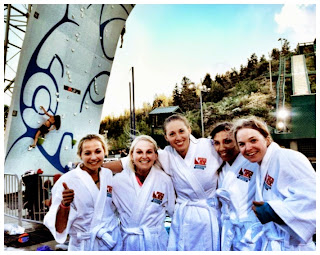