I was unsure where to begin writing about my trip to Chile. Chronologically, beginning with the event for which I was in South America, The North Face Master of Bouldering, would make the most sense. But it's the least fresh in my mind, and as great as the event was, it was unmatched in the surrealism I experienced in the Andes in the days that followed. I considered making two separate posts, one for the competition and another for my time in the mountains. But, as it is all one trip, it all has its place, and as you will see, I have chosen to condense and begin appropriately at the beginning.
Taking the red-eye out of Atlanta, I arrived in Santiago, Chile at around 9am on Thursday. 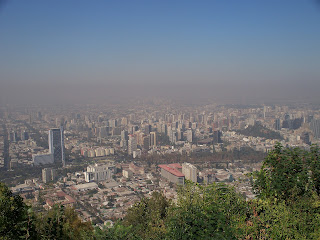 For those of you who don't know where Santiago is (because secretly I didn't) here's a little help: 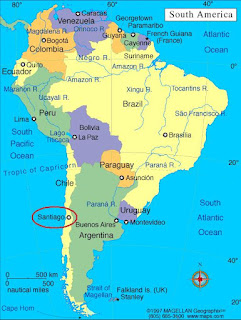 I was accompanied by my new teammates Alex Honnold, Cedar Wright ("Cheddar" in the southern hemisphere), and Samurai Yuji Hirayama. I was sincerely excited to be there, it was my first trip as part of The North Face team, and I couldn't have asked for better people to spend my time with, though I'm sure two of them were wondering why they would be competing in a bouldering event... 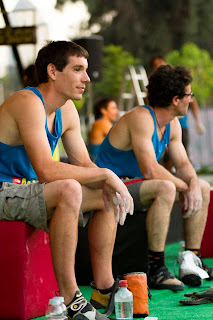 Surprisingly enough, the guys found themselves feeling right at home in their element. One of the qualifier boulder problems was a straight hand-jamming crack, and of all the male competitors (around 60), my boys were the only ones to do it!! 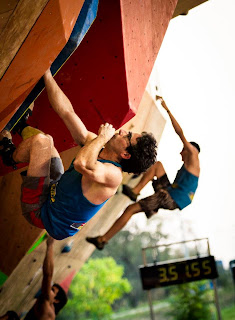 Honestly, I was nervous for this event. More so than I had been in quite a while. I'm not sure exactly why, though I have a few speculations. For some reason I was putting a lot of pressure on myself to do well, as it was my first real showcase with The North Face. Also, we were brought to this event pretty much as the most difinitive representation of super stars, Honnold especially. We even had massive athlete posters placed dead center in the spectator area. I built this idea up in my head that with a preceding reputation it left room for people to be disappointed by my performance, when in fact, they were just psyched we were there. 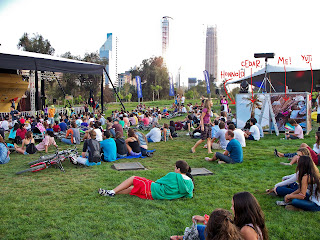 Nerves aside, the competition was a pretty spectacular﻿ event. Fully organized and put on by TNF Chile, things went entirely smooth, and there were probably a couple thousand spectators watching finals. I flashed all the finals problems, as did Chilean competitor Soho Langbehn, and because of this tie results were defaulted to countback to semi-finals where Soho had beaten me by a fall, thus putting me in second place to a worthy opponent, third place going to Thais Makino of Brazil. Fellow North American (Canada) Sierra Allen placed a proud eighth. 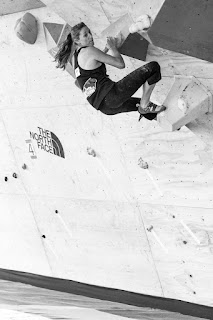 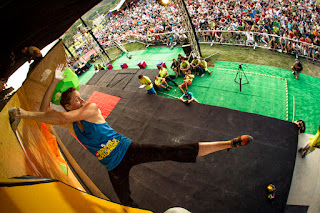 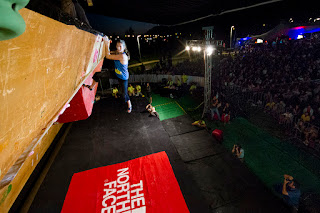 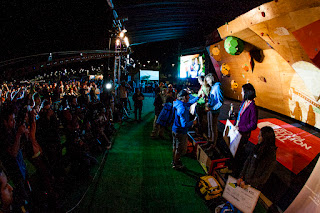 Things for my boys went equally as well, with Samurai Yuji getting 2nd by and attempt or two at 43-years-old (still killing it). Honnold ended up seventh (don't let him tell you he can't boulder), and Cedar has a great personality. 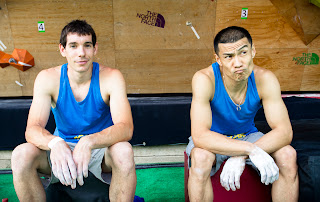 The day after the event we headed out to the mountains.
Driving to the Choriboulders from Santiago I couldn't stop imagining that we were living scenes from Jurassic Park.﻿ We had two matching Subaru Foresters, driving single file, affixed with massive TNF logos on all sides, packed to the brim with duffels and gear. In our safari vehicle were myself, Honnold, Cedar and Sierra. 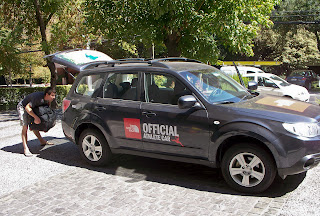 A third of the drive was on unpaved roads winding deep up into the dry climate of the Andes. Our camp was around 9,000 feet in elevation, set just below an 18,000 foot peak. 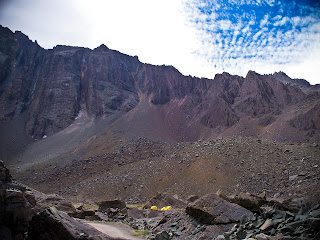 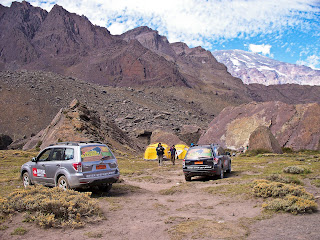 When we parked we were surrounded by boulders on all sides. Who's first instinct wouldn't be to go exploring?﻿ That's what all of us immediately did, in all different directions, when we hopped out of the cars. After scrambling around a bit I began to hear music floating up from somewhere, and when I popped up over the top of a nearby boulder, there sat an fiery-haired girl playing a ukelele-like instrament and humming "Somewhere Over the Rainbow." Her name was Fran. There were two other girls at their camp called Nine, with awesome beaded hair, and Natalia. I sat down to listen and we watched the sun set behind the mountains. Afterwards, as I meandered my way back to our camp, I had already come to the subconscious conclusion that I would be sleeping outside under the most star-filled sky I've ever seen. They really do sparkle like diamonds. This being my first time in the southern hemisphere, I was able to watch many constellations I've never seen before drift across the sky. Needless to say it was hard to get to sleep.
If I had to describe the climbing at Choriboulders in one word it would be: diverse. Luckily, I can use as many words as I want. Sometimes the rock was as sedimentary as Maple Canyon, and sometimes it was Colorado granite. There was no consistency to this whatsoever, and it was often the case that the stone differed drastically from the front side of a boulder to the back. Regardless, the rock made for some interesting and often peculiar climbing in a gorgeous setting. The wild horses wandering about didn't hurt the majesty of it all, either. 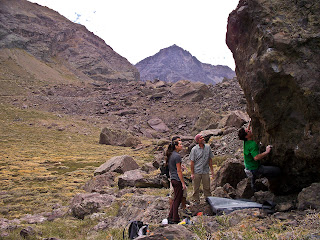 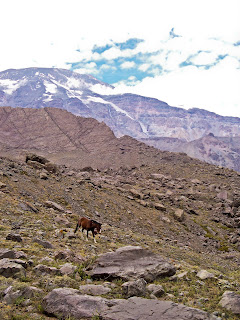 Hiking to the boulders with my new friends Nine, Fran and Natalia I found a bunch of really awesome fossils which I geeked out over to the point where﻿ they probably thought I was a huge dork. They saw how excited I got over a few stones, and began to explain that there were fossilized dinosaur footprints in the area, which I expressed I would definitely be excited to see. So instead of climbing we went dinosaur hunting! 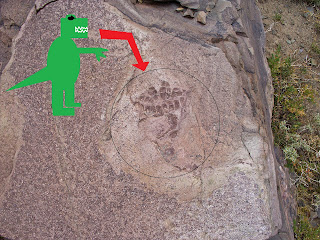 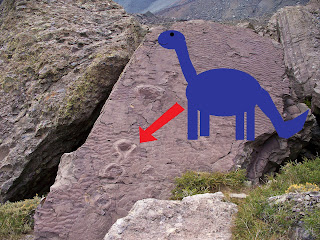 In the few days we spent in the beauty and magnificence of the Andes, hanging out around the campfire and sleeping under the stars﻿ there was so much laughter and camaraderie, so many surreal moments, and definitely some everlasting friendships made. It's surely a time I will never forget. 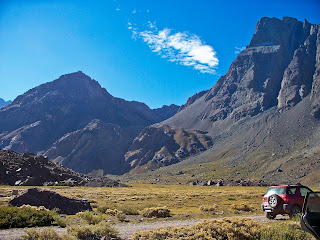 My last day in Chile we were back down in the city. Honnold and myself, along with Fran and Natalia, were invited to Nine's house for a big lunch. We learned how to make homemade gnocchi and spent the day lounging in Nine's big backyard, swimming in the pool, and... climbing her house... 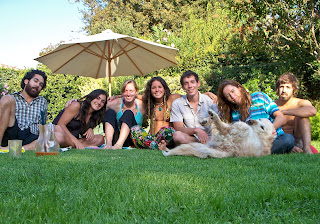 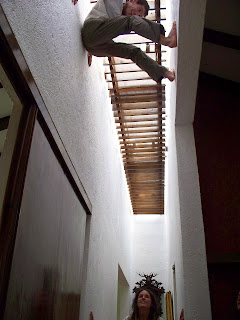 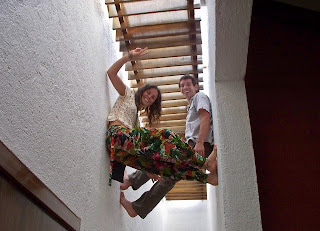 At the end of the day, Fran and Nine brought me to the airport and dropped me off. I left South America with a huge smile on my face thinking of the wonderful time I had in Chile and the incredible people I got to share it with.﻿
Posted by Alex Johnson at 18:29