The Biggest Backyard Bouldering Comp... Ever!

The first annual Minnesota Bouldering Co-Op Competition took place last Saturday on the biggest home woody in the country. The outdoor wall was built by Kris and Lynn Johnson, who are also among the founding members of the Co-Op. 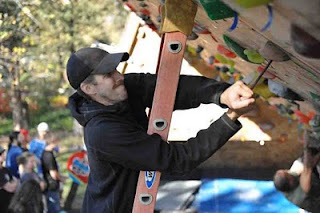 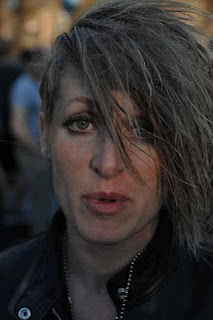 A space has been chosen for the new gym, and most of the dirty work has already been taken care of. The competition was held to raise funds to help pay for the remaining legal work that must be completed. You can find out more about the Minnesota Climbing Co-Op here.
Over 80 people came with their crashpads to climb, eat, hang out and show their support for the new local business. 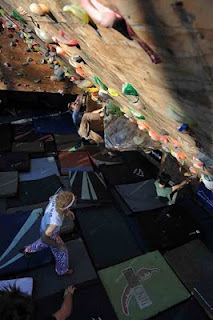 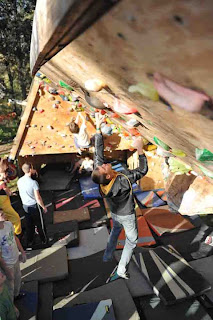 The competition format was simple and flawless. The problems were set at various difficulties and numbered 1-30. After you finished a problem, you walked over to the scoring table and drew a poker chip out of a bowl. There were many chips all numbered 1-15. Whatever the number was on your chip was your score for the boulder problem. Competitors then put the chips back into the bucket and headed back to the wall. The strategy was clear--the more boulder problems you did, the better your odds of drawing high numbers. With the format the way it was, it encouraged people to climb as much as they could. The competition officially began at 1pm, and motivation was so high that it carried on into the night. 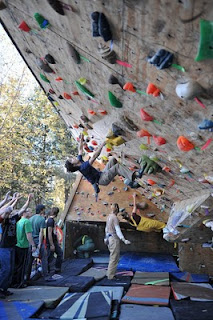 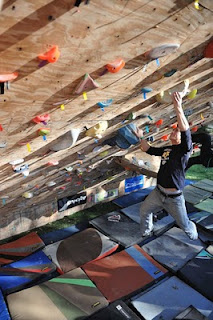 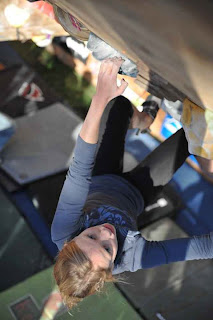 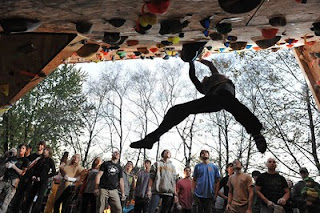 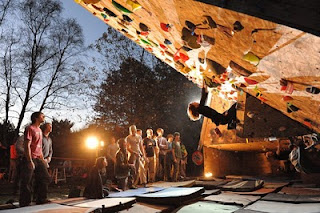 Along with being a bouldering competition, this event was also a costume competition. At the end of the day, when everyone turned in their scorecards, they also voted for "best costume." We had appearances from Batman, Gumby, Raggedy Ann, Michael Meyers, a Ninja Turtle, and a baby Clydesaurus Rex, but in the end we had to give it to the chicken! 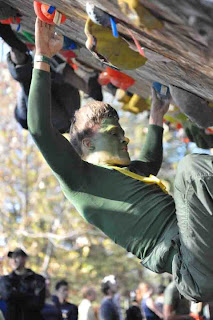 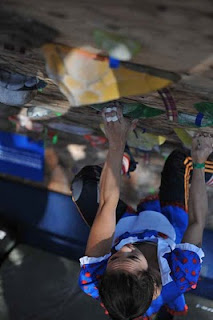 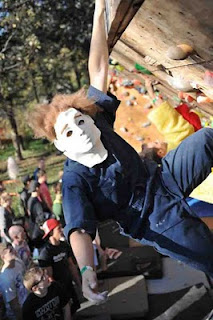 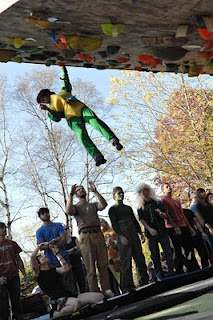 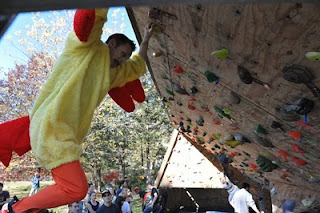 All Photos by Mike Simon
During the day while the comp was going on, Fritz and I hosted a Five Ten shoe demo, showing off the new Quantums, Blue Team Shoes, and the Women's Anasazi. It was a huge success! Every pair of Quantums we had were out on the wall the entire day. Overall consensus: two thumbs up! The Midwest approves. 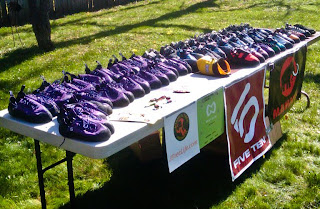 The backyard bouldering fundraiser was a ton of fun, and it helped raise money and awareness about the new Minnesota Bouldering Co-Op, which is planning its Grand Opening in January 2011. It's nice to hang out with friends and get some quality climbing time, which is exactly what this next week will be all about; tonight I fly to Colorado.
Posted by Alex Johnson at 16:34