I first met Kenny Barker and Sebastian Espinas when I was 19-years-old, a young pup fresh from my mother's den. I was living in and had ample living room space with a couch and a futon. My good friend Anna Hayes was coming to to climb for a few weeks and needed a place to stay, and she was bringing some friends. I had never met them before, but she told me their names were Kenny, Sebastian and Dylan (who ended up saving my life once and I heard is now dating a supermodel!)
You've probably heard of Kenny because he bolted, like, all the routes in the Red River Gorge. 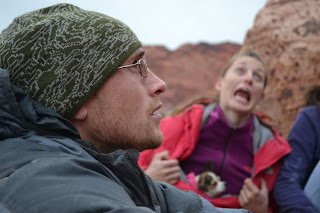 The infamous Kenny Barker and a scene from Alien
I feel like with fellow climbers it's understood that people will be living on your couch from time to time (if you have a couch), and that the favor would be returned in some way eventually. Sort of like a "pay it forward" deal.
So I recently found myself collecting couch debt in , sleeping on a giant red Lovesac in Sebastian's living room, with Kenny, his wife Julie, and their two dogs GusGus and Malakai on the air mattress. 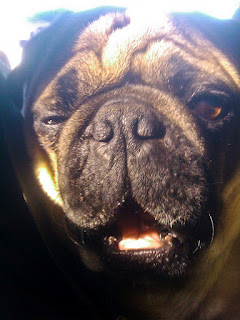 This is a GusGus﻿ 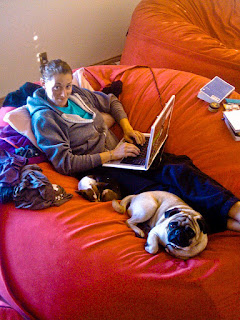 My cozy nest!
I escaped to Vegas when a snowstorm hit Bishop. And as much as I love Bishop it's just soo sharp. My pain tolerance is lessening. 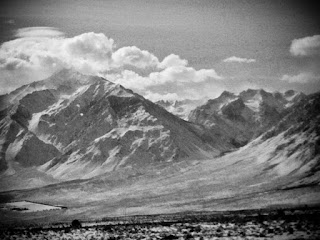 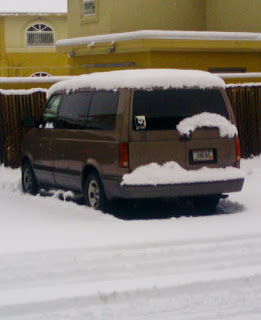 I'd never climbed in Red Rocks before, so I didn't really know what to expect. My first day in town I was solo and guideless out at the boulders, and it was an interesting experience. I don't often climb alone; I gain a lot of motivation from the motivation of others and usually find it hard to get psyched by myself. Plus it's always nice to be spotted. But this time was different, it was strangely rejuvenating. I've found myself climbing solely for the pureness of climbing this fall/winter, and it was heightened even more going out alone. Like I wasn't climbing for anyone but myself, which is how it always should be anyway. It was just different. I don't know how to explain it. Maybe I was just excited to be in a new area. And it wasn't that sketchy because I had just picked up a brand new big pad shipped straight to Bishop for me. 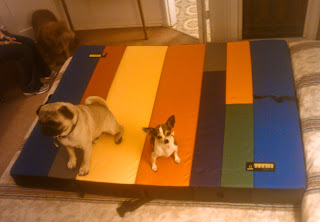 Anyway, the climbing in Red Rocks is loads of fun. I found the style a mixture of Joe's Valley and Hueco... both areas I'm fond of. Unfortunately Sebastian is a bigshot pharmacist, and was never able to make it out with us, but I had a really fun time climbing with Kenny, Ben Spannuth (he climbs 9a ohmygod!), Paul Nadler, and that one dude from the Citi Bank commercial. 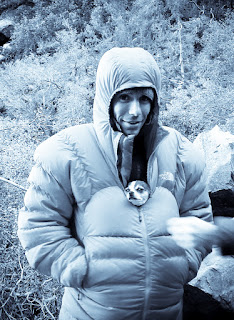 It was great climbing with Kenny again. I hadn't seen him since his wedding a few years back, and hadn't climbed with him in even longer. We have very similar strengths and climb at the same level, so it was awesome to have someone to project boulders with! Plus... he's pretty much just all around awesome. AND he's a decent cook! That Julie is a lucky lady! (Check out Kenny's video on DeadPoint http://www.dpmclimbing.com/!!)
Speaking of his cooking, we went on this mini healthy eating protein kick (about two hours' worth--so epic) and came home with a massive five-pound salmon filet! Kenny cooked, it was delicious and lasted us like three nights. After living in the van for a couple of months it was nice to have a kitchen to utilize again. And a dishwasher. 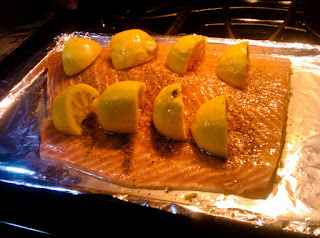 This is only half of our filet!
Back to the climbing. I did some stuff in Red Rocks; hard stuff, easy stuff, short stuff, tall stuff. I topped out an awesome highballish V9 in the rain called The Cat in the Hat or something. 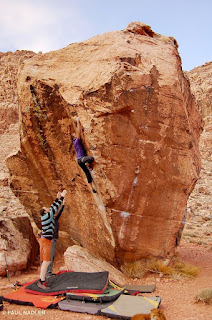 Fear of a Black Hat
Photo by Paul Nadler﻿
But nothing compares to the hike I made out to Stand and Deliver in . I was so destroyed I fell off the V1 warm-up. It took me two Lunchables, a Snickers bar and a Vanilla Coke to get any juice flowing back through my veins. The hike was probably around four miles (--?) and the last part was class five boulder scrambling. Not easy with crashpads and two-and-a-quarter dogs. It had to be a team effort on the doggie lifting. The hike was truly my most impressive accomplishment in Red Rocks. Lethal Design was nuthin’! 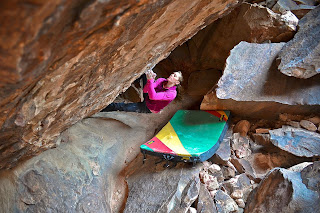 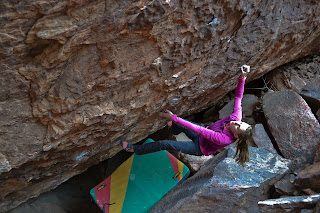 Lethal Design V12
Photos by Ben Spannuth﻿
Oh and since we’re on the topic of hiking, you’ll find if you go to Red Rocks that the paths are common horse trails. Horses poop. A . Way more than my four-and-a-half pound does. Horseback riders don’t stop to pick up their horse’s shit. So beware, you’ll have to walk through or around a lot of horseshit. And if you have a dog, your dog will try to eat it. It’s just a little absurd that I have to pick up my dog’s mouse-sized turds and they don’t have to pick up their horses’ sized turds. I was a little annoyed. Maybe I should write a letter!
Along with golf ball sized poo, there were quite a few douches hanging around some of their “moderate” projects. The first douche showed up wearing tight skinny jeans, a black cut-off T-shirt, crooked hat, and like forty tattoos. (No it wasn’t Max Zolotukhin.) And I’m not stereotyping him as a douche by his appearance, hello I’m not that shallow. My label came from his comment to my friend Julie as she was warming up on his project.
“Daaaang I wish I was short like you so I could use those intermediates!” He was serious.
Dude there’s not a height limit on intermediates. Use the smaller, shittier holds if you really feel like it.
Which brings us to our second douchebag experience: “The Clan of Douches.” Julie was climbing, I was resting/morally supporting. The clan was already camped at the problem Julie wanted to try, and conveniently they had the entire area all padded up. 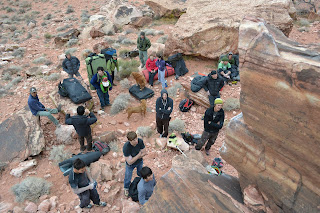 The CLAN! (Yes I'm in this photo. No I'm not a douche.)
Julie was the only girl working on the line. There are two ways to climb this thing: start on the big jug and dyno to the slightly less good, kind of awkwardly facing jug with your right hand. Or you could go from the jug to a funky slot crimp with your right hand and jump up left handed. One line, two methods, V7, and you dyno either way. So Julie and maybe two other dudes were using the crimp, all sixteen other bros were trying the dyno, everyone unsuccessfully.
Some mild comments started being made about what was the best beta, foot placement, blah blah, and then they start talking about how if you dyno skipping the crimp it’s V8, but if you use the crimp it’s V6. This went on for about ten more seconds until somebody referred to using the crimp as the “girl way” just as Julie was trying it. And that was about as much as I could handle, having done the problem (yes, it’s just one problem) both ways, by myself, with one crashpad and no spotter.
“It’s V7 either way!” I shouted to the douche clan. Naturally none of them took me seriously because that day I was only a female spectator, watching the real men work their tuff proj, so what did I know? Had it not been a crucial rest day I would have burned them off so hard! But alas… I was saving myself for a more meaningful rock climb. Julie was way over it by that point anyway, so we continued on our way. Ahh, douchebags.
My time in Vegas was winding down, and I had my sights set on one last problem. Book of Nightmares is back in . It’s a stunning, squeezy thugfest arête on the same giant boulder as Lethal Design. The crux is linking the second and third moves, but the problem is sustained, and refuses to let up the whole way through. It’s a little committing at the top, because the flat landing suddenly disappears and you find yourself over a pile of boulders. Nightmares was one of the hardest problems I’ve tried.
(There's a video of Paul Nadler sending the thing out there somewhere, I couldn't find it.)
Lately I’ve been in the no-project mindset, where if I can’t do something quickly that’s that and I move on. I think it’s because I was climbing in new areas and there was so much to try it didn’t feel right to have to spend two or more days on one problem when I knew I had a limited time. But Nightmares was different. Maybe there is something tantalizing about projecting a climb. My entire time in Vegas was spent eyeing it, staring at it, thinking about it, waiting for the right conditions, the perfect day. I knew it would be hard, but I also knew that it would be awesome. It was intimidating me, just sitting there, and I was almost afraid to try it because I knew how difficult it would be.
When we finally got on it, it turned out to be everything I was expecting. Powerful but complex, and so much fun. I saved it all up for that last day in Vegas, my last chance at doing Book of Nightmares. I felt strong and I came close; so close. In the end night fell, and I was exhausted and nursing a split tip.
It very nearly broke my heart walking away from it, leaving something unfinished. I hate when I can’t do things, because in my mind I can do anything. But finally having a project, and having to leave it behind, has been good for me.
The next day Fritz and I took off for Hueco, where we’ll be until ABS Nationals. I’m getting only a little tired of making these long hauls solo, Fritz is completely worthless as a driving companion. 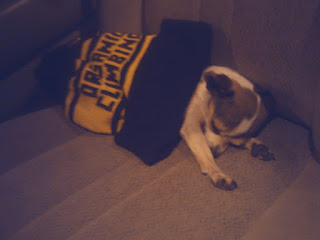 I’m moderately excited about Hueco. I do have mixed feelings about this place. There’s a lot to do, I know I’ll be climbing with awesome people, and the donuts down here are delicious. On the other hand, the restrictions are obnoxious and frustrating, and I feel terrible having to leave Fritz behind to go out climbing after months of letting her run wild. It is her homeland after all. 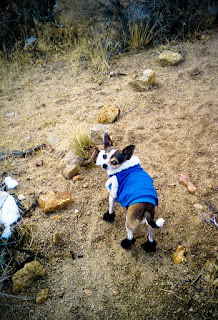 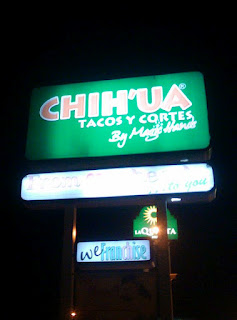