The Grand Opening of the Tallest Climbing Wall in the World 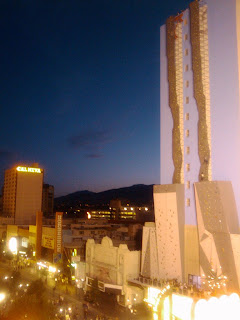 I've been a lot of places. I've seen a lot of things. I've been to Beijing and saw the dogs hanging on butchers' hooks in the market, I went bunjee jumping in Bulgaria, I was at the gay pride festival in Barcelona. In some strange way I can't think of anything that really compares to the experience I had in Reno, Nevada.
I visited Reno once before. I was a Freshman at Minnesota State University and we came for a track meet.
When Five Ten called about this event and I agreed to return I tried to muster up some positive memories of the town, and I couldn't. What I remembered from four years ago was a dirty city filled with homeless people and drunk hicks.
This time I was accompanied by Emily Harrington, Dave Graham, Boone Speed, Jon Cardwell and Josh Levin.
The city itself again failed to impress us, but the event for which we were in attendance did not; actually it exceeded all our expectations.
While the official location title is CommRow, I feel inclined to dub it "The Reno Project." I believe the ultimate dream of the owner is not only the revitalization of an old casino, but a community, maybe the entire city.
The motto of this town full of smoky casinos and semi-dazzling lights is "biggest little town in the world." I don't know if its slogan is true to form, but what I do know is that Reno now boasts the tallest climbing wall in the world. Maybe they should change the sign. 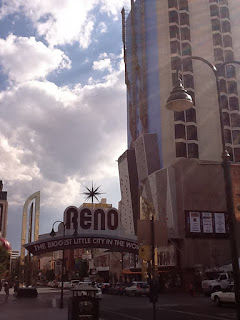 CommRow is smack-dab in the center of the city, located right on Reno's little "Vegas Strip." The building, an old abandoned casino/hotel, is surrounded by working casinos on all sides. In a city so casino-oriented, it's a refreshing atmosphere inside CommRow, where smoking and gambling are not allowed. 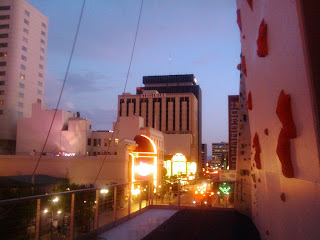 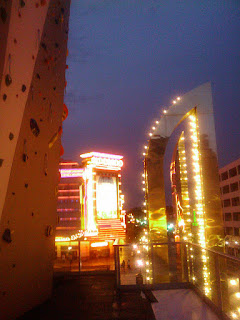 The wall is outside, built onto the side of the hotel. It's massive; it can be seen from almost anywhere in the city. We all saw it from the airplane when we flew in. The first pitch starts on the second floor balcony. It's seventy feet long. In addition to beginning thirty feet of the deck, which in this case is Main Street, you already hit 100 feet in height when you pull over the ledge to begin the second pitch, which is an additional 94 feet, totaling 194 feet in height. 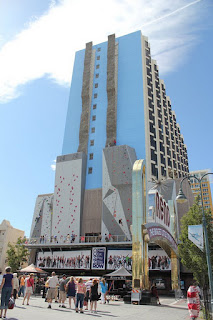 Photo by Rod Grossman
Because the wall is out on the side of a building, there's no padded floor beneath you. It's also quite unlike rock climbing, where you can see trees, bushes or at least dirt. When you look down between your feet you see pavement. It was honestly quite a scary experience, and felt extremely exposed. In addition to the huge wall, the second floor is also home to a bouldering gym with custom free-standing boulders made by The John Stack. Right next to the bouldering area is the martini bar "V15," the logo for which is illuminated with fluorescent lights. Also a smoothie bar. 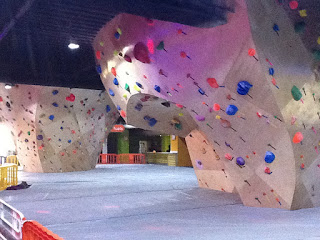 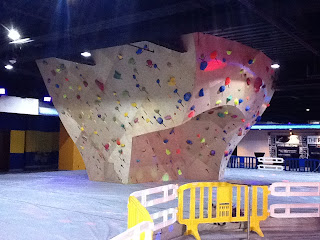 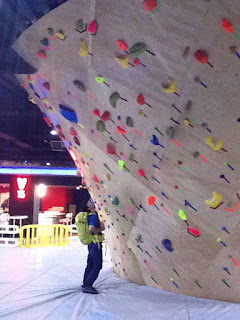 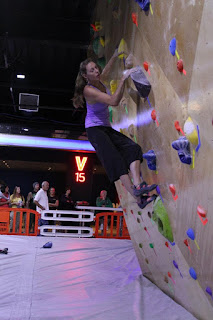 Photo by Rod Grossman
The first floor is another story. (Pun intended!) Consisting of a giant rectangular room with a tequila bar, whiskey bar, champagne bar, DJ table, dance floor, and coffeeshop/bookstore around the perimeter, and taco-stand-style mini restaurants in the middle, the first floor will most likely be the poular place for the non-climbers.
Now, the third floor is something completely different. "Club Cargo" shall potentially be the area for all live music and big name DJs. We walked through it during the day when it was empty and the accoustics were fantastic! Our footsteps bounced off the hip walls painted to look like piles of old cargo crates.
It was mentioned many times over the weekend that this place would be an ideal competition location.
As for the rest of the building, the hotel plans on re-opening in April.
The weekend felt so surreal to me. The fact that there is a climbing wall on the side of a hotel in the middle of downtown Reno was something I hadn't really ever expected to see, let alone all the things going on inside the building. There were still a few people opposing the idea, like the crazy old lady wandering around the bouldering area mumbling, "But where are the slot machines? This place will never survive without a casino. Reno needs more casinos!"
While a few people were against the idea, so many more came out to show their support. People who saw the wall from outside and wanted to give climbing a try for the first time were lined up through the gym. The kids from the local youth team and the gym employees were very positive and motivated. Five Ten put on a shoe demo and we did a little poster signing. (But seeing as Emily was the only one with a poster, it ended up becoming all of us signing Emily's posters!) 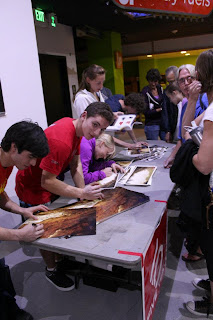 The Grand Opening celebration was exciting with an appearance from the Mayor, a ribbon cutting ceremony on top of the wall, and fireworks lighting up the sky. 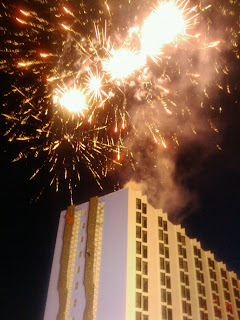 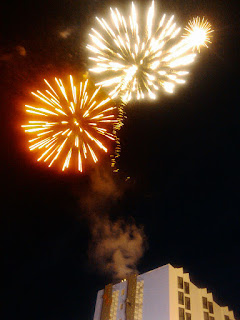 All in all, while I'm still in shock from everything I saw over the last few days, I think The Reno Project at CommRow is an unbelievably impressive feat. When I think about this idea an Eminem lyric randomly springs to my mind: "A visionary, vision is scary, could start a revolution..." In this case, I hope so.
Posted by Alex Johnson at 23:25