Last weekend Movement Climbing + Fitness in Boulder, Colorado hosted the USA Sport Climbing National Championships. It also happened to be my 22nd birthday!
Qualifiers were on Friday and the format couldn't have been more anti-me: 7-1-7; seven minutes for the first route, one minute transition, seven minutes on the second route. No rest period! Surprisingly I finished the first route. It was one of the most fun gym routes I've ever done. And all the holds were green which is my favorite color! Being a boulderer, and because we had a mere one [1] minute rest I did not get far up our second route, which gave me a 7th place combined score.
The next afternoon I competed in Speed Climbing for the first time in five years. Now, I know how the general climbing community feels towards the discipline of our sport that is racing up walls, so if you're reading this please don't tell anybody! Anyways it was fun, I got 4th place, and I need to run more. I blamed my wheezing on the Colorado altitude. Nobody needs to know I spent the past five weeks in Boulder...
Racing right along to the Lead Finals! There were twelve men in finals and nine women, and we were brought out and introduced. 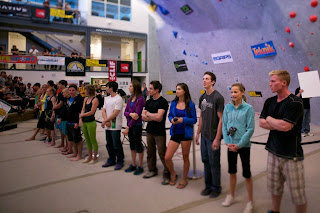 I am way over on the left in yellow!
Photo by Dane Cronin
After our introductions, we were able to preview our finals routes. The women's route was blue and the men's orange.﻿ Every single hold on our route was a pinch, and every hold on the men's route was a sloper. 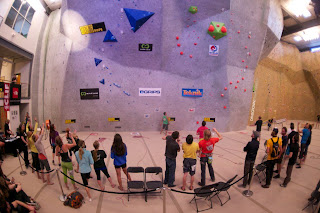 Photo by Dane Cronin
﻿The running order is reversed for finals so I was the third girl out to climb. The finals route for lead was extremely similar to our last finals problem at Bouldering Nationals... Just longer. (See photos on my ABS blog post! I am right!) When I walked out of isolation I was excited to climb the blue pinchy route! It was very fun, and even had a little dyno in the center. 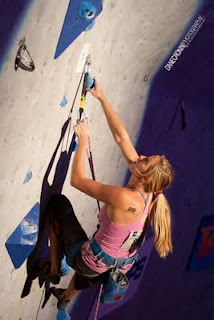 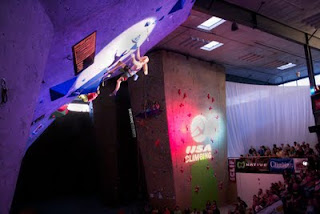 Photos by Dane Cronin
I fell off near the top going from this blue left hand pinch to this blue right hand pinch.﻿ My result in finals was second place!! The blue pinches spit off every girl except Sasha DiGiulian who easily pinched her way to the top with her 5.14c little girl hands. Unfortunately, finals only counted for 85% of the end result, and the 15% of being in 7th place in qualifiers sunk me down to 4th place at the 2011 Sport Climbing Nationals.

NOTE: After recent notifications scoring errors have been fixed, final results changed, and I have officially been bumped up to second place!! :) 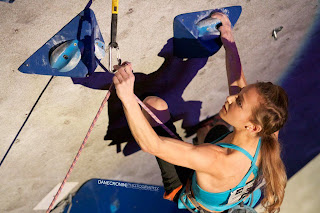 The Champ! Miss Sasha :)
please note the blue pinches
Photo by Dane Cronin
To kill time while the scores were being deciphered there was a Best Dressed competition﻿, the winner of which was voted on by the spectators. I was honored to be one of the top two with Paige Claassen. I was lookin' pretty fly but I'm pretty sure we tied. 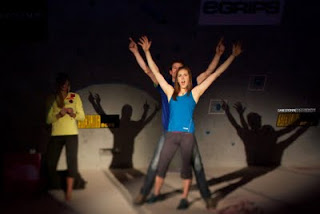 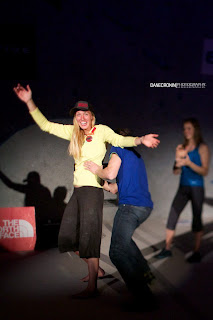 Photos by Dane Cronin
The scores still weren't quite tallied so all that fashion show excitement was followed by Taylor leading "Happy Birthday" being sung to me by the entire gym. Then finally the award ceremony. 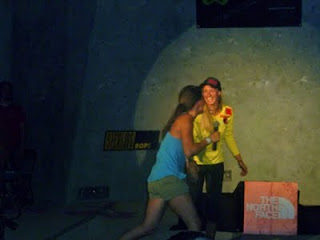 SCS Nationals was a super fun comp, but I was turning 22 at midnight and it was birthday party time. Check out these highlight videos by Jon Glassberg with LT11.
Women's Highlights
http://vimeo.com/moogaloop.swf?clip_id=22007009&server=vimeo.com&show_title=0&show_byline=0&show_portrait=0&color=ffffff&fullscreen=1&autoplay=0&loop=0