I mean, I spent most of my time in Japan climbing. Indoor, outdoor. This is but a tiny blurb from my time over there. It was an interesting time, climbing-wise. I'd been to Japan before, and absolutely loved it. This time I had the surprise pleasure of seeing an old friend, Yumi, from my first trip in 2008. This trip I was climbing with The Legend Yuji Hirayama, Akiyo Noguchi, Sachi Amma, Alex Megos, and Toru Nakajima. 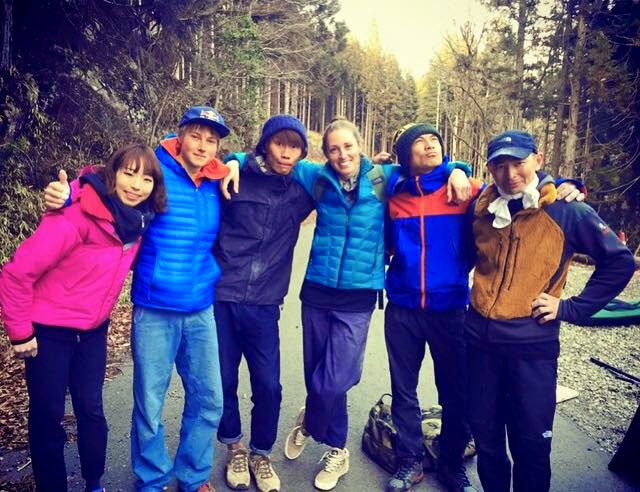 Climbing in Japan with Akiyo has given me the opportunity to get to know her as a person, and not as a competitor I only see occasionally at World Cups. We went training together and climbing outside together, and it hasn't felt the least bit competitive, as it sometimes, even often does with other [professional] female climbers. (Not just professional... But this is an entirely different topic.)

My perception of Akiyo is that she doesn't want to beat me personally; she isn't trying to be "the best." Obviously in competitions, that's a different story. But here, I honestly don't think she could care less about me even being around. (From a climbing standpoint. It was awesome spending time together as normal humans!)

Akiyo truly just wants to get to the top. Of everything. When she pulls on, she's a machine; effective, focused, calculated. Her efforts are inspiring, she tries harder than almost anyone I've ever seen. If she falls, I can tell she's already focused on her next attempt, at trying even harder. Which is insane, because I was sure she'd just expunged every ounce of effort she had...

That's personally what I find the most impressive. That someone can constantly be giving 110%. Sometimes I honestly think it's something I might be incapable of. Trying hard every single move, every single attempt? That sounds exhausting, and more in the mental sense than the physical. Magical things happen when I try hard, like this year's ABS Nationals for example. But truthfully, my climbing style has never called for all-out effort. I'm flowy, and dynamic, and I choose climbs that cater to that style. I pick moves that don't always call for a lot of tension, because I know it's a weakness. Basically I'm not that strong, but the act of climbing is easy for me; it always has been. And trying hard is hard. The more I climb outside, the more I realize how important body tension is. It takes a multitude of effort to make the body work like that when it isn't used to it. And mine really isn't used to it. 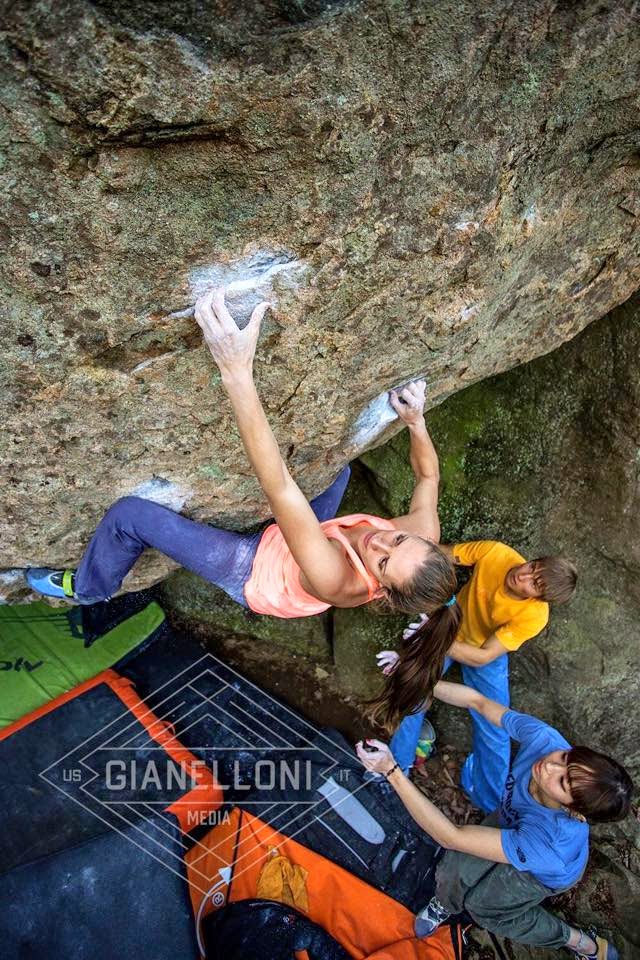 This year I've agreed to compete at Toronto and Vail again, and climbing and training with Akiyo and Megos over my two weeks in Japan has inspired me. They make me want to work hard. Akiyo was flashing things I was projecting, cruising things I couldn't get off the ground of. I'm not sure if it was circumstantial; jet lag, off week, etc. Or if she's currently exceptionally fit. I question how I was ever competitive with Akiyo physically; how I've ever been able to beat her. She's a beast! Albeit the entire time I was in Japan I felt tired, and eventually spent my final week battling a cold, even on an on day, I don't know that I could keep up. I obviously have my work cut out for me this spring if I want to hang with the World Cup big dawgs. 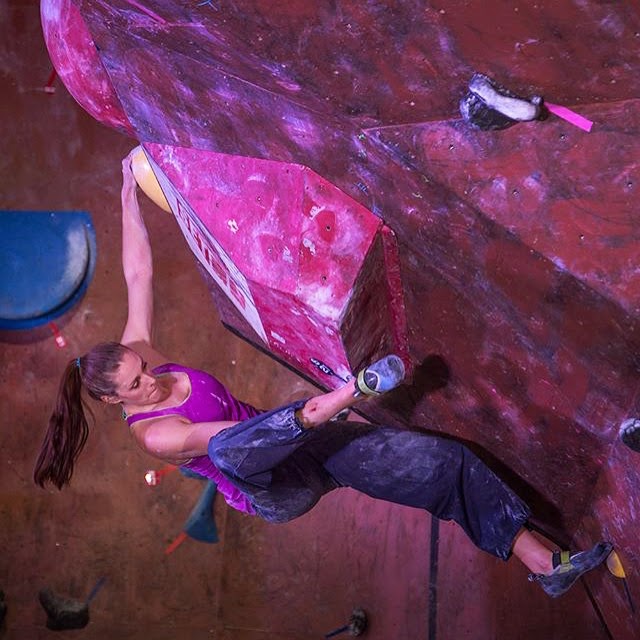 The climbing over there was a bit hard to get used to. Yuji's The North Face Cup was fun, and the problems varied between physically burly, and having technically finesse. I apparently totally underestimated the strength of the women's field over here and didn't even make finals, which was a bit disappointing. By "a bit" I mean quite. I tried to try hard. I wanted to put on a good show and really didn't want to let Yuji down, but especially I know these things happen. After the event we went on a "Rock Tour" and even the outside climbing felt a bit strange to me. Maybe climbing solely on sandstone for the last year left me completely worthless on having to deal with granite. That shit is slippery. And sharp!

Yes, I found the climbing in Japan difficult, and the grades stiffer than an appropriate metaphor. (Retrospectively, I think I had a similar experience on rock in 2008 as well.) I had a hard time convincing my body to engage, and, truth be told, the hardest thing I did the entire trip was approximately V7, while Akiyo was climbing everything in her path, including this rad little V12 in only four goes. She wanted to climb and project things with me and I felt bad and ashamed that I physically couldn't work on the same climbs as her. We did end up eventually climbing this fun little riverside V6 together, so that was cool. She was super positive and motivating, and it was nice to have a boulder to ourselves with such a big crew on the Rock Tour. 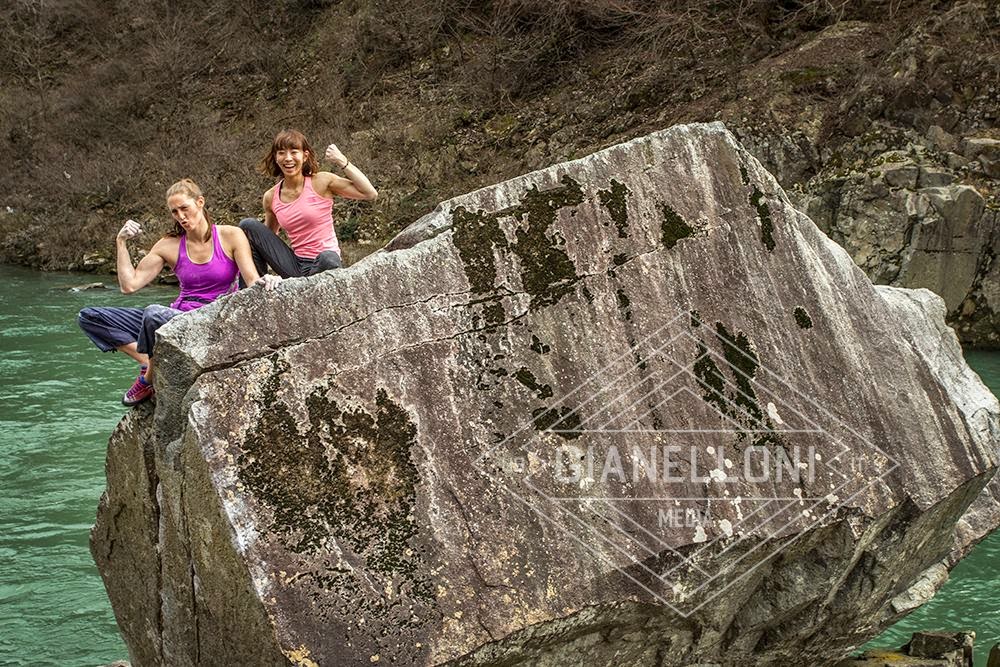 I can't help but imagine the things that must have been going through her mind watching me struggle on V8's, hell even V5's. "This chick won World Cups and climbed The Mandala??" Yes, Akiyo, I swear! I think I'm good at rock climbing..? Didn't I just do The Swoop? Why does this always seem to happen to me more than everyone else? Am I sounding whiney enough yet? Newsflash: rock climbing is hard. Sometimes it just is, and we don't know why. As I mentioned before, it's always been a natural thing for me, and not being the best is quite the blow to the ego. It's only the last few years I've found I've really needed to step up my game. This trip to Japan was another eye-opener to me, to just that fact. I am definitely not complacent with mediocre.
Posted by Alex Johnson at 20:12