The Portland Boulder Rally.
How I know I'm a performer.
It had been a while since I competed, especially against a field this incredibly stacked to the teens with super strong ladies. I was feeling quite "mehh" during the redpoint round, and just couldn't make my body execute in the way I know it can. I began shaking in my boots a little when time started winding down, and I knew I didn't have enough points to get into finals.
That's the thing about redpoint competitions... You know exactly what everyone else is doing. These types of events are probably more nerve-wracking than onsight comps where you know nothing. With redpoints you know what you have to do to advance, and if it's not happening--things get stressful.
It's also hard to climb with your whole group of friends in a redpoint comp, when your friends are Puccio and Angie Payne. Knocks the confidence a little. We all tried the group thing for the first half hour, and then realized it was NOT the strategy, and our group split fast.
There were two problems that had eluded me the entire three hours. I had watched a dozen girls do them in the first thirty minutes of the comp and just couldn't seem to pull them off.


When the announcement came on that there was only five minutes remaining in the round, I put my scorecard in the pile and waited for my name to be called. When it was my turn, I walked up to the "pink" problem, took a deep breath and said aloud, "Ok. Climb like you know how to f*&%ing climb!" And I executed. While topping out, I whispered, "One down, one to go." Came down and put my card back into the pile for the "green" problem that was right next to it. With a minute left my name was called. I walked up to the start and said "One more, baby, come on!" I felt exhausted, I was so spent. After three hours of climbing, whether I made finals or not came down to this boulder. I stuck the move I that had evaded me, but with six moves left til I was on top, I began to chicken wing. We've all done it, you get to that point where you're so pumped your muscles begin to fail. I fought hard, and chickenwinged my way up that damn boulder and when I was standing on top I straight up celebrated with a loud "woohoo!" 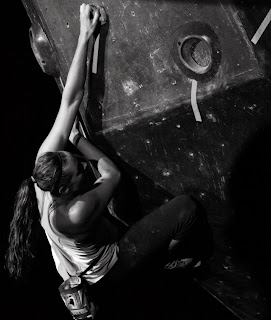 The redpoint round ended and I turned in my scorecard, still not confident  I'd even qualify for finals. I secured a backup plan--commentating, and headed to lunch, the crew reunited after the heat of the competition was over. It was a stressful lunch until I got a group text message saying "Congratulations! You are receiving this message because you have qualified for finals at the Portland Boulder Rally! Please show up at..." I had qualified in the 6th, and final, place. I sighed a breath of relief. We had a few hours to rest up, and then--game time.
Because I felt so off during qualifiers, before the finals I put a little Gnarly pick-me-up energy booster in my drink and crossed my fingers that my fatigue and previous chickenwinging wouldn't resurface.
Re-warming up in isolation I still felt pretty bad. But as soon as I went out and the lights and all the eyes in the building were on me... I turned it on. Something about the pressure of the situation, and having people cheering for me... it makes me WANT to show them what I can do. The crowd was psyched, they were so supportive, it was the loudest crowd I've ever heard and I didn't want to let them down. I love the crowd, and interacting with them makes me feel confident. I performed. I performed my way up into third place! I tied with Nina Williams, and instead of combining 3rd and 4th place's prize money, then splitting it-- the event organizers just raised the entire purse!! We both got 3rd place's winnings! I thought that was very, very cool. You can bet I'll be back next year. Let's hope Puccio doesn't show up so it's a fair fight. :) 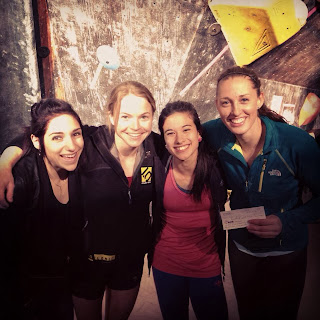 PCI Clinics
The day after the event, about a dozen pro's stuck around to teach clinics to a bunch of the younger competitors. Personally, I had a two hour private in the morning with Lauren, who has made significant progress since we worked together last year after the comp. It was great so see how far she's come! Then we had our two hour group clinics with all the pro's, where my group worked on momentum. Following that, Carlo Traversi and I had another hour long semi-private where we really got to break down specific movements. I've done a few clinics with Carlo in the past, and think we work really well together, he's a great teacher. We currently posses the power to help in the sculpting of future generations of climbers. This is huge, and we need to do the best we can to pass the torch. 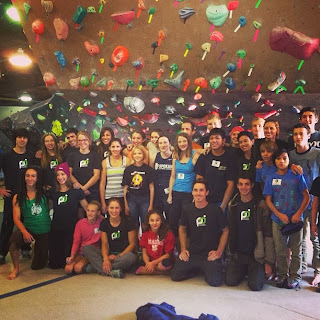